How does an SFP module work? – Kurth Electronic Skip to the content

How does an SFP module work?

The expansion of fibre-optic lines is progressing. . In addition to FTTC, where the fibre cable is laid to the curb, connections for FTTH (to the home) and FTTD (to the desktop) continue to increase.

The following questions are now in focus: How is it possible to connect the fibre optic cables to the different end devices? How can a hardware developer react flexibly to these variations?

1 What is a transceiver module?

A transceiver module, like an SFP, works in both directions. The word “transceiver” is a combination of the words “transmitter” and “receiver”. It can therefore act as both a transmitter and a receiver and thus establish communication between different devices. The counterpart to a module is the so-called port, in which the module can be inserted. The SFP modules are described in more detail in the following section. 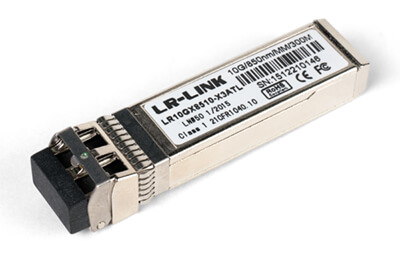 Fig. 1: An SFP transceiver
Picture by Dmitry Nosachev under the CC BY-SA 4.0 licence

The abbreviation SFP stands for “Small Form-factor Pluggable”. An SFP is a standardised transceiver module. SFP modules can be used, among other things, to enable network connections with Gbit/s speeds. Both multimode and singlemode fibre optic cables can be connected. The most common connector type used is an LC connector . Visually, the connectable fibre optic cable can also be recognised directly by the coloured bracket of the SFP, as can be seen in Figure 1. A blue bracket usually signals the use of a single-mode cable, black brackets indicate a multimode cable. Currently there are three classes of SFP modules, which are defined by their transmission speeds. SFP28 has another special feature and can transfer the data rate to four so-called lanes. In this case, there are four times 25 GBit/s. An SFP28 module can also convert a 100 GBit/s port into four 25 GBit/s ports.

1.2 What is the difference to a QSFP?

Fig. 2: A QSFP module
Based on a picture by Aurélien Rinaldi under the CC BY-SA 4.0 licence

1.3 What makes the SFP port so special?

With an SFP port, it is possible to exchange the individual transceivers in the so-called hot-swap procedure. This means that the modules can be changed during operation and thus very quickly adapted to the current port. Shutting down the unit or the switch could shut down parts of the communication until it is restarted. This is prevented by the hot-swap option. If a transceiver is defective, it can also be replaced quickly and easily without having to replace the entire hardware group. The use thus allows a high degree of flexibility.

2 How can SFP be applied?

This chapter focuses on the uses of SFP.

Fig. 3: A switch with SFP ports
Ditail of an image by hdaniel under the CC BY-SA 2.0 licence

2.1 Which cable or plug types can be connected?

SFP and QSFP modules are differentiated according to their connection type in singlemode and multimode fibres. The diameter of the fibre optic cable core differs for singlemode with 9 µm and multimode with 50 µm to 62.5 µm. The direct visual distinction is marked by the colour coding of the yoke for most manufacturers. The types used for the connectors differ mainly in the type of transceiver. SFP modules are usually provided with an LC port. QSFP modules with an LC port or MPO port. The so-called GBIC transceivers typically offer the connection of an SC connector. This should be taken into account when choosing transceivers and connector types.

Are the different SFPs compatible with each other?

SFP modules and SFP+ modules have an identical size. Depending on the SFP+ port, they can also support the normal SFP modules. However, this does not apply to every SFP+ port. Conversely, an SFP+ module cannot be used in an SFP port.

SFP28 ports can also control SFP+ modules. However, the data rate must be reduced to 10 GBit/s at the port for communication to take place.

Due to their dimensions, QSFP and SFP are not compatible with each other.

2.3 How can the right SFP be selected?

The transceiver modules are selected to suit the application. Typical applications can be found in the area of Ethernet, Fibre Channel or SONET. Based on the application, the SFP must be used for the appropriate cable type “singlemode or multimode” and the necessary data rate. When selecting, there should therefore be no “bottleneck” in the communication chain.

Transceiver modules such as SFP or QSFP can be used flexibly. These enable communication between components and are very well suited for the realisation of GBit/s communication links due to their possible data rates. Their hot-swap capability for quick adaptation or replacement of defects, without shutting down the hardware, opens up many possibilities for use in high-speed networks.