How is Wi-Fi tested? – Kurth Electronic Skip to the content

How is Wi-Fi tested?

Especially in the digital age, the use of the internet as well as the connection possibilities are an important aspect and thus belong to the general good. The time of using network cables is over. In combination with SMART Home, wireless transmission via Wi-Fi is becoming increasingly important. The Wi-Fi connection should be available throughout the entire house, preferably without any loss such as a halting, unfluent transmission of videos in parts of the house. After all, digital communication for both work and pleasure (SMART-Home, Video on Demand and Co.) should be usable everywhere in the house. But what does Wi-Fi actually mean and how does it work?  These and other questions are explained in more detail in this blog post.

Fig. 1: Introducing the topic of Wi-Fi

1 What does Wi-Fi mean and how does it work?

The first step is to look at what Wi-Fi actually means and how communication works exactly. These basics form the foundation for further and more in-depth details on the topic of wireless communication for private and business use.

The abbreviation Wi-Fi stands for “Wireless Local Area Network”. The connection is realised via a radio standard. The classic network card schematically becomes a radio network card by adding an antenna. The classical network nodes (exchange points for data traffic) thus become small radio cells. The radio cells can communicate with each other as long as they are within range.

1.2 How do devices communicate via Wi-Fi?

When setting up a Wi-Fi, it is usually started with the installation of an access point (often in the form of a router). The router serves as a base station within the network. It defines the network name via the SSID (Service Set Identifier) and combines access with a password in the best case. The end devices can log in as clients via this SSID and the associated password. The router, as the base station, manages the registered clients. So that the latter can see the router’s information (SSID, encryption, transmission types), the router sends out so-called “beacons” at regular intervals. Beacons are information and management packets. They receive all the necessary information for identification between base stations and participants. The base station thus informs all participants in the radius about its own presence and at the same time offers the participants to establish a connection. Wi-Fi beacons are usually sent ten times per second. 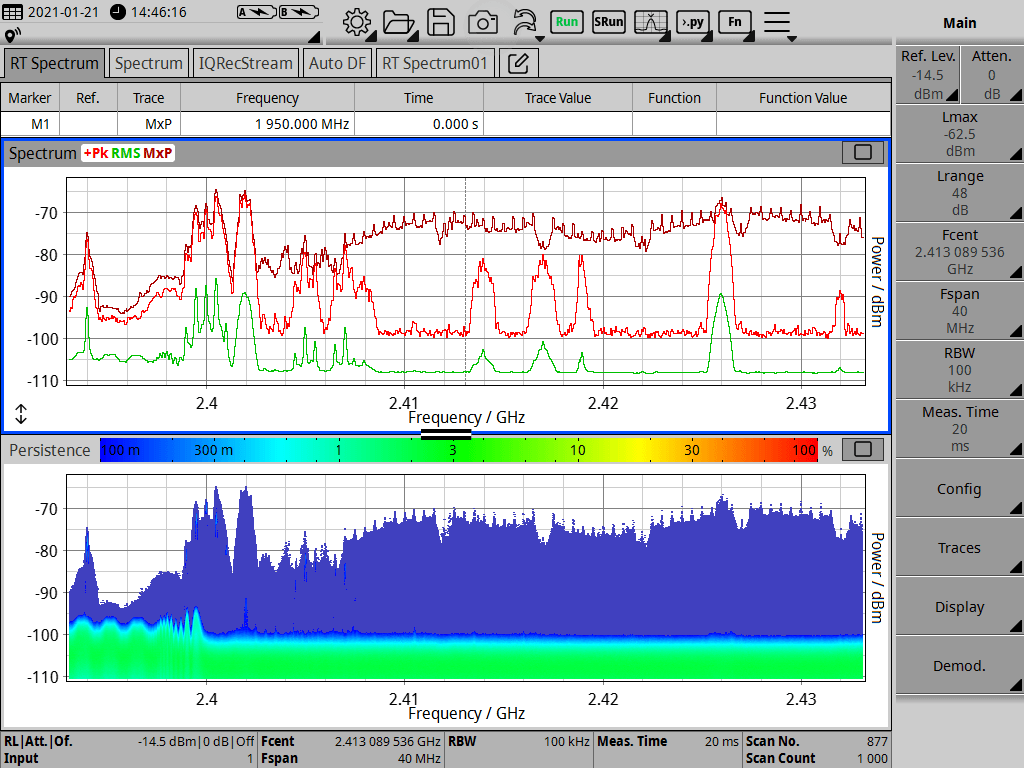 1.3 What are Wi-Fi channels and what are they used for?

The bandwidth of the respective channels depends on the standard used and ranges from 20 MHz to 22 MHz to 40 MHz. The width of the available frequency range must be taken into account. For Wi-Fi 2.4 GHz, this is 83.5 MHz. The usable channels overlap accordingly. For interference-free transmission, the correct spacing of the channels must be selected.

Non-overlapping channels based on channel frequencies are channels 1, 5, 9 and 13 in this example.

The Wi-Fi 5 GHz range is divided into two frequency ranges. There is one range from 5150 MHz up to 5350 MHz and a second frequency range from 5470 MHz up to 5725 MHz. Depending on the standard, bandwidths between 20 MHz, 40 MHz, 80 MHz and 160 MHz are possible in the Wi-Fi 5 GHz network range. The bundling of channels to generate more bandwidth has thus been significantly increased compared to Wi-Fi 2.4 GHz. Within the Wi-Fi 5 GHz network, the following channels can be used in Europe:

Depending on the frequency range and channel number, the distance between the carrier frequencies is 10 MHz or 20 MHz. This allows the use of channels with lower distances to each other and thus the bundling of several channels than in the Wi-Fi 2.4 GHz network.

For both private and business use, the range of the Wi-Fi is a key element. The internet has become a standard commodity. If the reception of the end device is poor and it feels like it takes hours to set up a website, users quickly become frustrated. To counteract this frustration, here are factors that have an influence on the range and must therefore be taken into account.

Wi-Fi-2.4 GHz and Wi-Fi-5 GHz have different wavelengths based on their channels and frequency ranges. The higher the frequency, the smaller the wavelength. The wavelength can be calculated using the following formula:

𝛌 corresponds to the wavelength, c to the speed of light and f to the frequency. The wavelengths used in the Wi-Fi range have both advantages and disadvantages. The smaller the wavelength, the less sensitive it is to obstructive environments. At the same time, however, the damping increases. This means that the range decreases with the same transmission power.

2.2 What is the radiated power and resulting range?

In order to keep the range in Wi-Fi 5 GHz at a similar level to Wi-Fi 2.4 GHz, its transmission power must therefore be increased. Wi-Fi 2.4 GHz works with a radiated power of 100 mW (EIRP); Wi-Fi 5 GHz allows a maximum of 1000 mW. The abbreviation “EIRP” stands for “equivalent isotropically radiated power”. The EIRP indicates the fed-in transmitting power multiplied by the antenna gain. The maximum radiated power is assigned by the Federal Network Agency for each frequency range.

The range of common Wi-Fi routers is highly dependent on the manufacturer and lies in a range of 30 m to 100 m in the open field. In a building, the range is reduced by the ambient conditions.

2.3 What influences the reach?

The actual range depends on many factors. The maximum radiated power is defined, but the resulting range is completely different depending on the manufacturer. For example, the range depends on whether the antenna used is installed inside or outside the housing. In addition, the orientation of the antenna influences the propagation of the electromagnetic waves. These described influences come into play on both sides, i.e. at the transmitter and at the receiver.

If you now move from the free field with no or few obstacles into a building, additional factors such as architecture, wall thickness and wall materials as well as electrical interference come into play.

3 How can the Wi-Fi be tested?

When assessing the Wi-Fi, it is important to control subjective sensations such as opening a page on the basis of objective measurements. There are various ways to test a Wi-Fi. From superficial observation to in-depth data analysis, there are almost no limits. Which measurements make sense is in the eye of the beholder as well as the goal pursued. In the following chapter, a few measurements and measurement possibilities are presented. In practice, of course, there are many more.

3.1 How can the speed of the internet be checked?

To assess the internet speed, it is a good idea to use a speed test. There are various providers of speed tests that are fundamentally based on the same principle. For the speed test, data packets of different sizes are downloaded from a server and sent in the opposite direction to a server. In this way, the speed of the download and upload is measured. The TCP “Transmission Control Protocol” is currently used for this. It is important to choose the right server, which is carried out by the speed test itself, so that no additional losses are caused by unnecessary routes and the deviation of the result is as small as possible.

A comparative measurement via network cable is recommended to assess the Wi-Fi Internet speed. This can be done directly at the router or modem. In this way, the possible loss of wireless transmission can also be shown.

Example speed test according to Ookla

3.2 Which test procedures can be used?

There are various test procedures for assessing a Wi-Fi. The test procedure should be chosen based on the desired objective. In private households with several rooms, it is often sufficient to observe the signal strength with one end device at different locations.

In companies, the number of rooms and end devices to be covered increases. The work performance of employees or machines could be impaired by a lack of Wi-Fi coverage. Running with a terminal device is more time-consuming and documentation is more difficult. In this area, the creation of a so-called heat map is recommended for assessment, which indicates the reception strength in colour via the building plan. This requires special measurement technology that, for example, controls and evaluates several defined end devices in parallel. This creates a 2D/3D image of the signal coverage.

If, for example, there are deeper and more complex interferences, then a detailed examination of the Wi-Fi signal is also necessary. Among other things, the use of a spectrum analyser is useful for this. With a spectrum analyser, the Wi-Fi signal can be viewed in the frequency range. With this analysis, deep insights are possible, such as the observation of an interference signal.

3.3 Which signal parameters are useful?

There are different approaches to the signal parameters. For a rough overview and initial assessment, start with a look at the signal strength. If the signal strength is low, the data transmission rate decreases. The next step is to check the choice of channel. Are there possibly other Wi-Fi networks operating on the same channel or close to it? If so, one should change one’s own channel and, if possible, realise a distance of 3 channels so that no overlapping occurs. If these simple checks do not lead to a result, deeper analyses are necessary, which are often only possible in connection with special measurement technology. One possibility is to look at the SNR. The abbreviation SNR stands for “signal-to-noise ratio”. Within communications technology, this is a well-established means of analysing a signal. In the spectral view of a signal or frequency band, the level of the noise floor is an important indicator. If the noise floor is too high in relation or, conversely, the signal level is too low and thus the distance between the two is too small, either interference or communication interruptions can occur. 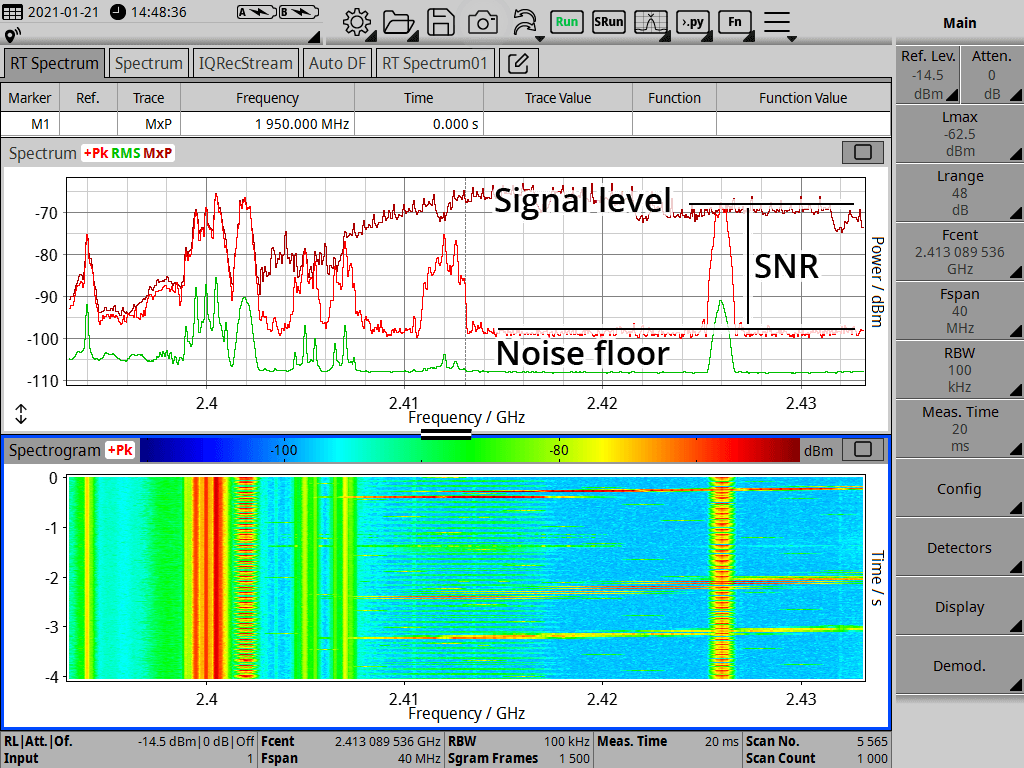 The SNR is measured in dB. A good or sufficient SNR value depends on many factors and the hardware used. Not every Wi-Fi-capable device works at the same level. However, it is generally assumed that from an SNR value of 10 dB, basic communication between the participants is feasible and thus at least e-mails can be read. From 25 dB onwards, streaming services or large downloads should work properly.

Wi-Fi stands for Wireless Local Area Network and is based on a radio standard. Wi-Fi currently operates within two frequency ranges, firstly the 2.4 GHz range and the so-called 5 GHz range. These are divided into channels. Once a Wi-Fi connection has been successfully established, the range depends on various factors. For private use, for example, the architecture of the house, the layout of the rooms or the wall thickness play an important role. Depending on the circumstances and the hardware used, achieved ranges of between 30 m and 100 m are the rule. If the reception quality is poor, you should first take a look at the reception strength. A standard speed test is then a good aid.